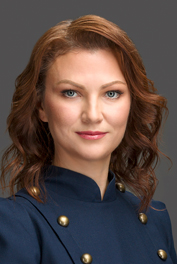 In 2019 and 2020 Olga was personally recommended by international rating Best Lawyers in two categories Litigation and Mergers and Acquisitions Law.

She started her legal career in 2002 in the management company of Metallurgical Holding as a legal advisor. Olga's scope of duties included supervising the work of the business operations in various cities and managing the company's contract department. Olga supervised and provided legal support for the holding's transactions, carried out a legal due diligence and an assessment for major international contracts (with a value of EUR 1 million and more), and negotiated the entry into those contracts. She was engaged in claim and lawsuit work and representation in courts.

In 2005 to 2007, she was the head of the legal service of "Megatron" Gambling Company for the Urals region. The company was part of an international holding company operating in the entertainment and gambling business. Olga organized legal work for the holding's business operations in the region "from scratch" and provided comprehensive legal support for the company's activities, including legal support for the company's gambling halls in the Urals region (Tyumen, Kurgan, Chelyabinsk, Magnitogorsk, Surgut). She represented the company's interests in arbitration courts and courts of general jurisdiction, participated in the resolution of labor disputes, and interacted with state authorities, including appealing against illegal administrative decisions.

In 2007 to 2009, working as a lead legal advisor for a law firm, she provided legal support to major clients in the field of housing and communal services and entertainment (gambling business).

In 2009, she was invited to INTELLECT Law Firm as the head of the corporate law practice. Having become the head of the practice, she completely reformed it by putting together a competent team of lawyers and by ensuring the uninterrupted functioning of all the areas of activity. Under Olga Zhdanova's leadership, the corporate law practice has become one of the most stable ones in the firm.

In 2016, she obtained the status of a bankruptcy commissioner and became the head of the bankruptcy support practice. Thanks to Olga, the practice has grown dozens of times and has become one of the most profitable in the company. There are about 30 bankruptcy projects being worked on simultaneously, involving more than 30 lawyers.

During the first 10 years of her work for INTELLECT, Olga has trained several highly qualified lawyers, including a bankruptcy commissioner and a new head of the corporate law practice who joined the team as law academy students.

In 2018, she was accepted as a partner by a unanimous decision of INTELLECT' Board of Partners. She is also practice leader of  Bankruptcy.

12 out of 12! INTELLECT ranks on 12 practice area scoreboards — including four

INTELLECT ranked in all the eleven practice areas in which Pravo.ru-300

INTELLECT has been included in 10 industry rankings of the tenth “Law.ru-300”

The Russian Government introduced moratorium on the filing of insolvency