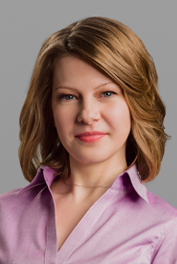 Svetlana Veresova is listed among Russian leading lawyers in area of intellectual property by such international rating as the Legal 500 EMEA since 2014. Specializes in registration of trademarks (including under the Madrid system), registration of computer programs and data bases, preparation and registration of license, assignment and franchise agreements, intellectual property proceedings in general jurisdiction and arbitrazh courts, Chamber for Patent Disputes and before antimonopoly authorities. Svetlana has been practicing in INTELLECT-S since 2002, she files more than 100 trademark applications per year.

Trademark registration work is a significant part of our IP lawyers's work.

We regard it as a full-value work which furnishes a considerable part of the firm's total revenue which increases every year.

The significance of this work for us can be explained by specific figures: during January 2015 – March 2016 INTELLECT-S registered 111 trademarks and worked on 238 applications. 3 international registration were registered in WIPO register.

Significant contract work load was coming and continues to come from big  producers and retailers like:

Representing the Kopernik Group of Companies

A pending suit over illegal use of a trademark. INTELLECT-S is