If you see an ancient automobile on a street of your city this summer which has a clearly foreign look, don't get surprised. It's not an illusion or a full-scale mock-up but nothing short of a British "Austin 7" named Babushka (with the stress, naturally, on the second syllable).

In 2017, the roadster turned 80 years, and the rarity owner, Christopher Blakey of England, made up his mind to celebrate the jubilee of the little "Austin" by going on an incredible tour across Russia. Two years of preparation – and what seemed to be all but a dream translated into reality.

The new slogan of the law firm INTELLECT could not have come at a better time for this project: Litigators and business lawyers all over Russia. Throughout the entire itinerary from London to Tokyo, Philipp Koverchenko, Head of the INTELLECT Law Firm International Desk (the firm's foreign operations), keeps in touch with Christopher Blakey 24 hours a day via his London number.

The big journey commenced in little Corsham. The motor rally started off in the middle of July from Corsham, Christopher's home town situated in the country of Wiltshire, 32 km away from Bristol. The final destination will be Chofu, a suburb of Tokyo: on September 20, the 2019 World Rugby Championship will kick off at the Ajinomoto Stadium, with Chris carrying a ball there from Twickenham, the location of the previous world championship. Thus, the trans-Siberian challenge combines Christopher's three main passions – for traveling, for rugby, and for "Austin 7" automobiles. 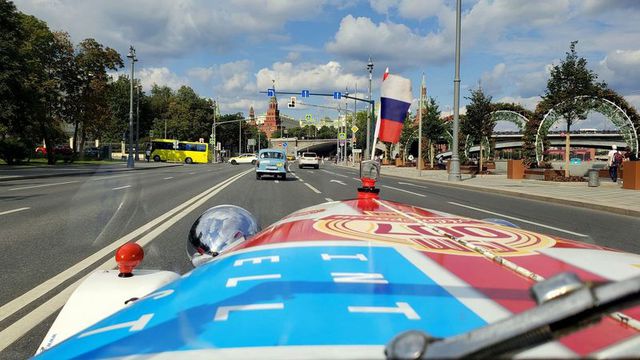 According to Chris, his impressions from communications with Russians are downright positive. A rarity automobile is a kind of catalyst for getting acquainted and talking in a friendly manner – wherever it goes, the "Austin 7" comes across a well-wishing interest. And even the traffic police officers don't stop the unusual car, raising a hand only to snap a salute.

However, this is exactly how Christopher envisioned Russia. One of the objectives of his voyage is to prove to himself and others that real Russia looks nothing like the hideous image created by western mass media. Incidentally, three more "Austin 7" automobiles were going to participate in the motor rally, but their owners changed their minds being afraid of going across an unpredictable, frightful country – that's how the British view Russia thanks to their newspapers and television.

But Mr. Blakey resolved to turn the idea of the trans-Siberian challenge into reality against all odds. His preparations for this trip had taken much too long for him to turn around and call it off. He recalled the Soviet Russia and wanted to see what it's gotten to be like now with his own eyes. Possibly, his friendship with Ilya Zlotnikov, a simultaneous interpreter and a native of Yakutsk who has long been living in the USA, played a role of its own. Ilya is as keen on traveling as Christopher; therefore, their epochal acquaintance can hardly be called accidental. Although, everything did happen by accident: Ilya was passing by the St. Bartholomew's Church in Corsham and saw a classical English automobile parked near the temple with... a Russian flag and captions about the trans-Siberian challenge. Naturally, he made up his mind to wait for the owner and ask him about all the details. And, at the same time, find out whether he was nuts. By the way, this question is posed to Chris quite frequently. That's exactly what he is asked: are you nuts? "A little", responds Chris with a smile.

Ilya is the second "pilot" of the roadster at the motor rally stage from Moscow to Novosibirsk. Initially, he didn't plan it. But when he learned that Christopher's friends had opted out of the trip and that his family were leaving the Russian capital for home, England, Ilya darted off and came flying in to the White-Stoned City from America. 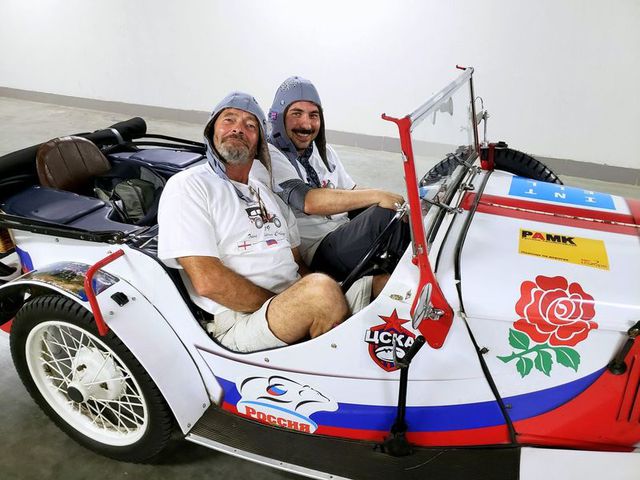 Incidentally, it was Ilya who thought that they needed a legal partner for their motor rally: along the entire itinerary, the rarity English automobile and its crew members may come across a variety of situations which are to be resolved legally and require the knowledge of the Russian laws. It was by no means by accident that INTELLECT was selected as a partner: in the first place, Ilya has enjoyed a longtime friendship with the firms' lawyers "mixed" with cooperation, and, in the second place, the company has a network of offices across Russia which positively meets the needs of travelers. "INTELLECT is an ideal partner in our eccentric project," Ilya is confident.

The motor rally across Russia is just beginning. En route to Vladivostok, Christopher is planning to visit Kazan, Perm, Yekaterinburg, Novosibirsk, and Chita. The exact dates of arrival in a particular city are unknown: the vehicle's maximum speed is 60 km/hr; furthermore, the "Austin 7" can only run in the daytime: it is simply dangerous to move due to the specific location of the headlights and no safety belts in place. Also, the risk of the vehicle malfunctioning can't be ruled out, but for that occasion, the British has mustered the support of the Russian AutoMotorClub providing assistance on all of the country's roads. As for spare parts, Chris has them.

We Are in Chelyabinsk, Hire New IT Attorney

HR rules supreme: INTELLECT-S expands its office network in the

We give importance to supporting future lawyers. Support for