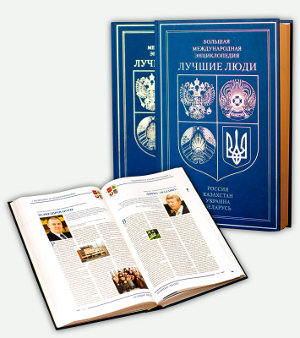 The plaintiff, owning the wordmark Лучшие люди России™ ('Best People of Russia'), and publishing an encyclopedia of the same name, sued in Moscow in December 2010 a sole trader from Rostov-on-Don, Southern Russia, who published a line of handbooks (similar to the encyclopedia), with the titles including the words "best people" (in Russian), and owned a website with the domain name лучшиелюди.рф (i.e. "bestpeople.rf").

Best People of Russia
The encyclopedia Best People of Russia is a well-known publishing project. Published in Russia by Spets-Adres, it makes part of an annual international encyclopedia Best People, started in 1999. The encyclopedia is a collection of success stories across three CIS countries where it is published in print and e-form; its 2011 edition contained 10 146 entries. Entries are selected on official (federal and regional) and public associations' recommendations. The placement of minimum-length (40 words) entries is funded by official grants from the member countries; expanded entries are privately funded.

The plaintiff's counsel, INTELLECT-S partner Maxim Labzin, obtained the court's judgment against the use of the contentions titles as early as May 2011. The domain name case went up to appeal and then on to cassation review.

The Moscow City Arbitrazh Court dismissed this claim; and the judgment stood on appeal in August.

The plaintiff's counsel disagreed with the trial and appellate courts which erroneously associated the trademark (Лучшие люди России™) only with one element of the domain name (лучшиелюди) and ignored the ccTLD (.рф), which made an integral part of the domain name.

The plaintiff's INTELLECT-S counsel brought in evidence the statement of the domain name registrar saying that the ccTLD is part and parcel of the entire domain name. The trial and appellate courts ignored it without cause. Moreover, the courts failed to accept that Internet users perceive 'рф' as the abbreviation of 'Russian Federation', that the defendant's entire domain name лучшиелюди.рф is clearly perceived as 'Best People of the Russian Federation' — confusingly similar to the trademark Лучшие люди России™ ('Best People of Russia'), both phonically and semantically.

To prove his case, the plaintiff's counsel called a commercial public opinion survey. Most respondents, polled by a most authoritative body, VTsIOM, thought the website www.лучшиелюди.рф belonged to the publisher of the Best People of Russia encyclopedia. The trial and appellate courts disallowed this evidence, though.
The plaintiff's counsel also relied on Civil Code provisions which expressly prohibited confusingly similar designations not only in domain names, but also in other methods of addressing on the Web, which was the case of лучшиелюди.рф as a whole.

The cassation review held at the Moscow Federal District Arbitrazh Court accepted all arguments presented by the appellant's counsel in this first ever domain name dispute in the ccTLD .рф — the more so that the domain owner directly competed with the appellant, including the use of his website.

On cassation review, the court granted the appellant's complaint, sent the case for retrial to rectify the previous courts' errors, and held that the '.рф' portion of the domain name must be taken into account in deciding if a domain is similar to a trademark.

The defendant then renounced the domain name which the plaintiff took over. The retrial court dismissed therefore the action which was already on, but the goal was achieved and the plaintiff did not appeal.